Description
The UPPS-P Impulsive Behavior Scale (Cyders et al. 2007) is a 59 item self report scale which is a revised version of the original UPPS created by Whiteside and Lynam (2001). The scale can be used with adults or adolescents to identify the separate personality facets that have been previously lumped together under the term impulsivity.

The UPPS-P has five subscales:

This scale has been used with patients who display impulsivity in a variety of settings, including in the context of drug and alcohol abuse (Whiteside & Lynam, 2003), gambling (Miller, Flory, Lynam, & Leukefeld, 2003), risk taking behaviors, problems with sustained motivation and attention and ADHD (Miller, Derefinko, Lynam, Milich, & Fillmore, 2010). This scale is important in understanding the reasons why individuals engage in impulsive behavior. For example, if two individuals engage in the same behavior for different reasons (e.g., gambling to distract from negative emotions versus gambling to sustain positive emotions), they are likely to respond differently to treatment.

Validity
Using factor analysis of a number of available impulsivity scales, the original UPPS identified four different pathways leading to impulsive behavior (Whiteside & Lynam, 2001). The fifth subscale (positive urgency) was then added using additional items (Cyders et al. 2007), as this subscale was of theoretical importance to the construct of impulsivity. A study comparing responses on the UPPS-P with interview data (Smith et al., 2007) found that there was the same factor structure of impulsivity traits from interview data as from questionnaire data. Additionally, there was convergent validity in the assessment of each construct across methods and discriminant validity between the different constructs. Further validating the constructs within the measure, the parent version can discriminate between several attention deficit/hyperactivity disorder (ADHD) subtypes, including predominantly inattentive type (ADHD/I), combined type (ADHD/C), and combined type with behavioral problems (ADHD/ODD) (Miller, et al., 2010).

Interpretation
Scores are presented for each of five subscales, plus a total impulsivity score. In addition to the raw scores, in order to put each subscale into the same metric, the mean is calculated for the items on each subscale, from 1 to 4, where 1 indicates that the respondent did not indorse impulsive answers, and 4 indicating a high level of self-reported impulsivity. In addition, results for each subscale are converted into a percentile rank based on the Spanish version of the scale from a sample of 150 undergraduate students (Verdejo-Garcia, Lozano, Moya, Alcazar, & Perez-Garcia, 2009). Higher percentiles represent a higher level of impulsivity compared to this sample. Given that the university sample is likely to have a lower level of pathologically impulsive individuals compared to the general population, interpretation should be done in consideration that percentile ceiling effects are likely.

– Negative Urgency
Refers to the tendency to experience strong impulses under conditions of negative affect.

– Positive Urgency
The tendency toward rash action in response to very positive mood.

– (Lack of) Premeditation
The tendency to fail to think and reflect on the consequences of an act before engaging in that act.

– (Lack of) Perseverance
Difficulties remaining focused on a task that may be long, boring, or difficult.

– Sensation Seeking
Sensation seeking encompasses two aspects: (a) the tendency to enjoy and pursue exciting activities and (b) an openness to trying new experiences that may or may not be dangerous. 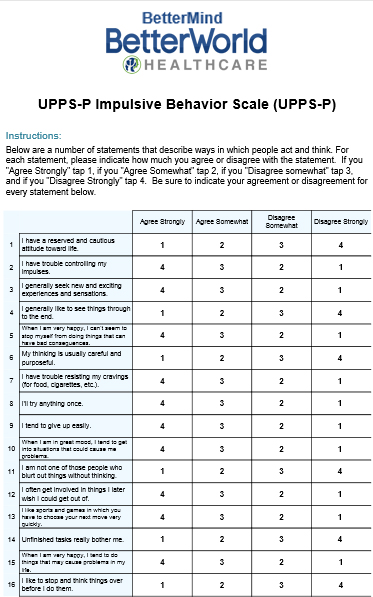 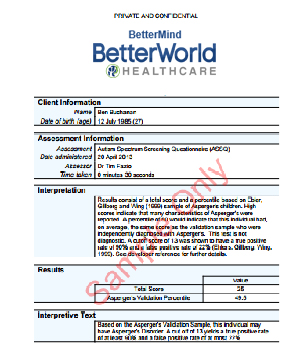 Your free account will get you access to all of BetterMind’s features, assessments, metrics, scores and graphs all at ZERO cost. We know you will BetterMind because it was built with professional health practioners, like you, in mind. Try it for free and see how BetterMind can enhance your practice.

BetterMind software was designed with practioners in mind, and is easy for clients to use. Assessments are automatically scored and metrics are graphed with results available instantly.